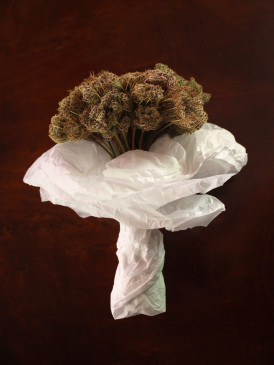 An afternoon with international guests around the work of Wendy Morris.

During the event Botanical Bodies, on the political and ritual meaning of plants we will illuminate some social and political aspects of the history of plants and their co-option throughout colonial history, as well as their feminist and folkloristic contexts. The invited speakers are interested in the history and science of plants and how botanical treatments were historically associated with women’s social roles as healers and herbalists as well as various types of rituals. We will refer to the meaning of plants in different struggles – against colonialism and slavery, and for feminism and women’s rights in Europe. Join us for an extended afternoon of talks, encounters and discussions!

Central to this encounter is Wendy Morris´s recent project The Herball in which she is researching and compiling a herbarium for a 17th century midwife living at the Cape. The project involves historical, material and artistic research that will materialize as sound works, gardens, writings and interdisciplinary collaborations. The Herball will be homed at Netwerk Aalst for the next three years.

By Wendy Morris, with a performance of Hildegard von Bingen, music by Mariske Broeckmeyer and Hendrike Scharmann, and stories of trees by Bart Backaert, head of the green services Aalst.

Behind the old city hall in Aalst grows an ancient tree, a Ginkgo biloba, that produces a fruity nut that drops in the autumn to cover the grass underneath. Described by townsfolk as a gigantic vegetal uterus, the seeds of this tree ripen on the ground to develop a pungent and powerful smell. Townsfolk keep their distance. This autumn a temporary encampment is set up next to the tree. The Wandering Womb stops over on her travels. She brings with her sweet smells in the form of summer strewing herbs: Artemisia vulgare, Filipendula ulmaria, Melilotus officinalis, Melissa officinalis and Tanecetum vulgare. FUME is the encounter between the two entities, an orchestra of the scented and the stinking.

6 – 8 pm: on plants and politics. Talks and discussions

6 – 6:45 pm: Floraphilia: On the Interrelations of the Plant World, Botany and Colonialism by Aneta Rostkowska

Aneta Rostkowska will talk about the project Floraphilia: On the Interrelations of the Plant World, Botany and Colonialism. This project is dedicated to the social and political aspects of the history of plants, botany and botanical gardens. She will focus on two exhibitions as part of this project: Floraphilia. Plants as archives realized at the Academy of the Arts of the World in Cologne in 2018 and Floraphilia. Revolution of plants which will open as part of the Warsaw Biennale in October this year. An important part of the talk will be an analysis of the sculpture of Candice Lin Untitled (Abortifacient Flower) from year 2016, presented in the first exhibition, that produces a smell composed of plant ingredients that were used to carry out abortions by women living in various contexts, especially under slavery (fennel, wormwood, juniper berries, carrot seed, cardamom and parsley seed). The induced abortion is here to be considered as a way to negotiate power in conditions of extreme powerlessness and plants become non-human collaborators in a system where there is no other way of resistance.

Georgiana Cojocaru will talk about Romanian folklore (as it is theorized in conventional anthropological approaches) which revolves around plants and animals, be it myths, legends, rituals and the design of magical objects. She will elaborate on Romania’s recent past after the fall of communism when nationalistic and far right movements appropriated this set of rural knowledge to advance masculinist, vitalist and identitarian narratives. As a response, the talk will attempt to reclaim this ‘national’ heritage as forms of decentralised knowledge that accommodate feminist, non-human, and anti-patriarchal perspectives.

Degustation of a new jenever infused by plants brown bears eat immediately after their hibernation and prepared by artists Casper Fitzhue and Bart Van Dijck for the current exhibition URS GEEST at CIAP in collaboration with Jenevermuseum Hasselt and EUROPALIA ROMANIA.

Info and registration
To subscribe or for more information: charlotte@netwerkaalst.be or 053 70 97 73.

The event is a part of the two-year project Floraphilia: On the Interrelations of the Plant World, Botany and Colonialism. In 2019 Floraphilia takes place in Berlin, Aalst and London together with an exhibition Floraphilia. Revolution of plants to open on 25.10.2019 in Warsaw in cooperation with Biennale Warszawa. Floraphilia is a project realized by the Academy of the Arts of the World/Cologne and funded by the German Federal Cultural Foundation.

The event belongs to the public program of the exhibition ALIAS on view at Netwerk Aalst.